My heart skipped a beat…or two!

Last night all round the mountains there was a mammoth thunderstorm…brilliant flashes of lightning and long angry rumbling thunder, that growled around the whole valley, Mont Blanc completely shrouded in dark angry grey clouds. But this morning the sky was a clear hot bright blue. We set off for a day of “practice” for the big climb….

…and headed down to the cable car which would take us up to L’Aguille du Midi. We had been joined by two additional guides as we were now to be one guide for 2 climbers; Luca from Italy and Hamish from the UK.

The cable car swept us up along with a host of tourists to 3,800metres. It’s a big viewing point across to the summit of Mont Blanc so we could see where we would be aiming for tomorrow. However today, John wanted us to practice hiking along a ridge and climbing/scrambling over rocks. From where we sleep in the Goute hut tomorrow night, the climb to MB summit is mainly along a narrow ridge…so we donned our helmets, crampons and ice axes at the ready. I was teamed up with Jordan and our new guide Luca. The first dilemma was climbing over the gate to access the actual mountainside, it was quite high and Luca and Jordan had to rather unceremoniously heft me over! Well it isn’t easy fence climbing in crampons. We were immediately out at the top of a long steep ridge…. 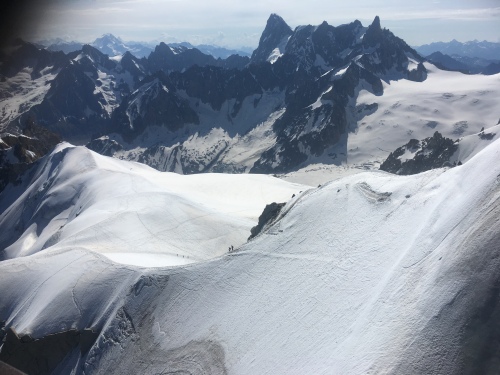 Deep breath and off we set, Jordan leading, me in the middle and Luca controlling/guiding us from behind. The snow was quite wet and slippery in places but we made steady progress and you soon forgot the steep drop that fell away immediately to the left, and the less steep one to the right. As we settled into our rhythm of ice axe thrusting into the snow and yomping down a couple of steps and repeating, a tune popped into my head “Luca” by Suzanne Vega…and the first verse went round and round in my head like a crazy loop – I didn’t embarrass myself and sing it to Luca! I did mention it to Jordan but the reference was lost on him (too young) – he was humming a Will Young song!!!! Luca took the lead, and Jordan brought up the rear. Luca is the dude! He was wearing jeans, he was so cool I almost expected him to pause, lean on his walking pole and casually smoke a cigarette – he didn’t! He just laughed when I commented on his jeans and said “ah, today is easygoing, I don’t wear them tomorrow “.

We carried on at a good steady pace, and my bonkers mind drifted off into what I can only describe as rather surreal. In my head I started singing a South African prison worker song from the apartheid era which the prisoners would sing in tune with their work along roadsides or the like…quite why this popped into my head I can’t tell you but the rhythm of it certainly helped as we crossed the long wide snow slope, especially as it began to climb. I was taught the song in travels through the Eastern Highlands in Zimbabwe in 1995/96 and by a lovely Shona man called Teddy, he’d be impressed I could remember it!

We reached the bottom of the ridge and hiked across a long snow slope just below the summit of MB. Uphill a bit, and then began to scramble through a mixture or rocks and snow. The snow petered out and we paused for a drink of water and to decrampon.

We had scrambled/clambered over a fair chunk of boulders in our crampons which had initially felt clumsy and awkward but as the snow had gone amongst the rocks it was deemed easier to take them off. But the idea of clambering, albeit tied on a rope to two other people, at about 3,800 metres high, with quite severe drops left and right, over great boulders in heavy walking boots didn’t seem any less awkward! Luca smiled…he called me Arrianna (apparently Italian for Harriet, Jordan was Jorge), and said you will be fine, just watch my feet and follow. Yep, easy as pie! 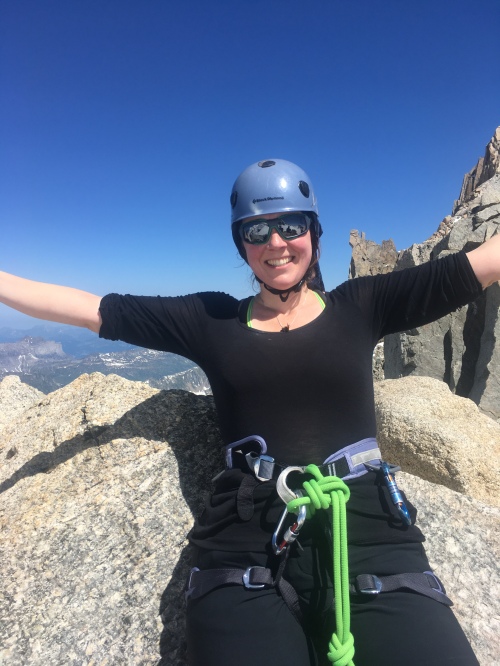 Luca, readjusted the ropes, we packed away our crampons and axes, and readied to climb across this lump of rocks that sit so conveniently 3,800m high leading up to a view point, the Refuge des Cosmiques, across from the Mont Blanc summit. There was a vast drop to the left, right down into the valley of Chamonix! We had to twist through gaps, hoik ourselves up great huge boulders. Now I’m adventurous and game for most things, but this tested me…a huge boulder with what felt like to me a completely flat face, and I had to climb up the face of it in sodding hiking boots aware of a gaping drop to the left. To say my heart missed a beat is an understatement. My legs turned to jelly. Luca’s face appeared at the top looking back down at me and he cheerily called, “arianna get your leg up and use the crack for your fingers.” What effing crack I muttered, glancing back at Jordan, and I can’t get my leg that high, I’m simply not that flexible! Jordan was epically brilliant. He just nodded and said full of confidence, “you’ve got this”, and somehow I did!

Impressively I’m the one in the middle!

This scenario was repeated a few times and I am eternally grateful to Jordan for his patience and encouragement, as I’m sure I was just being a big Jessie! Looking ahead the hut seemed closer but with a lot of climbing and inching along narrow ledges…

I gave myself a stern talking to…”come on, you can do this” and my mantra became “be more Olly, be more Olly” (those of you who knew the wonderful Olly Vick sadly stolen from us in the Eithiopian plane crash in March, will know exactly what this mantra means). And it bloody well worked, I finally clambered over the railing onto the terrace of the Refuge with tears pouring down my face as Olly’s smile and laughter filled my mind. Adrenalin, grief and relief all combined at once, Luca seemed quite surprised but gave me a gentle squeeze on the shoulder. We then headed inside to join everyone else for a coffee before gearing up again to head back across the snow slope and up the ridge to the cable car. It was a surprisingly comfortable hike, and at a pace where Jordan and I could chatter away to each other.

Heading back down to Chamonix in the cable car there was a sense of elation at the climb we had done today…everyone is tired but doing well. Aiden smashed it in a team with Fernando led by John, and even had time to pose as a pro!

We’re all preying for good weather as the air around us is thick and heavy waiting for another thunderstorm to break.

The intention is to head to the Goute hut tomorrow morning and stay there tomorrow night, then set off at 2am for the summit (2am!!!!)

The weather forecast can’t make its mind up and we are at its mercy, and preying for more hot sunshine.

So, hopefully next time I write we’ll have summited the highest mountain in the Alps, Mont Blanc.

….and remember, BE MORE OLLY!

3 responses to “My heart skipped a beat…or two!”