Today I hit the coastal path from Tregardoc to Port Isaac.  There and back it is a round trip of just shy of 12 miles. However, I seriously think that with the ups and downs it should really be about 13 or 14 miles – it feels like about 15 at least.  The last time I did this exact bit of the North Cornwall coastal path was roughly 10 years ago with my sister Catherine, we were camping in the farmer’s fields in exchange for a few bottles of wine!  I wasn’t running it then, but as I hit the first steep climb, which is the worst as it is steep steep steps cut into the cliff, I did have a chuckle to myself as I remembered reaching the top last time and having to hold a conversation with some walkers coming the other way – I think I succeeded in sounding lucid and not out of breath…it might not be quite possible to say the same of my wonderful sister (sorry Catherine), but she did reach the top with a very friendly smile.

So, the weather was a tad more inclement this morning, and I waited until I had heard Paula Radcliffe interviewed on Women’s Hour regarding her upcoming swansong marathon at the London Marathon this Sunday, and then I set off. Wet weather gear packed into my rucksack, along with a bit of glug and some fudge – what more could you ask for.  It wasn’t cold, just grey, and ever so slightly spitting as I hit the cliffs.  The first bit of the route is actually quite pleasant, gently running along the tops of the cliffs, looking over Tregardoc beach and a couple of other subsequent inlets.  Basically at the bottom of the farm fields.  Some very lovely black sheep looked on rather quizzically as a sauntered past.  A few styles and kissing gates, and then the first descent.  The problem with going down is that you look ahead and see the going up on the other side.  The first climb is the toughest and best taken all at once without stopping, luckily I didn’t have to speak to anyone at the top as there was no one there and I slowly let my heart rate settle and began running along the top again and down the next desent.  This goes on for a while – at least 2 or 3 descents followed by steep exhausting climbs.  The thoughts going through my head at this point was doing the reverse going back the other way.  The annoying thing about this route, and yes even running the beautiful coastal path has its annoying moment, is the fact that every time you get to a peak, or jutting out bit of cliff you can see Port Isaac in the distance, it teases you mercilessly as although at times it seems to get closer quite quickly, you are also able to see the number of times you have to descend steeply and climb again.  Coupled with this was the fact that I completely missed a rather large stepping stone over one stream and plonked my whole foot into said stream, and with the other one trod immediately in a rather fresh cowpat!!!!! Not ideal.  At the crest of the next peak it flattened out abit and I trotted along enjoying the blossoms, (more primroses and bluebells) and was then surprised by my phone bleeping at me – I miraculously had some signal!!!!  It was my fella texting me from darkest India, where he is on the Ganges river!!  A bit of a contrast to slogging along the coastal path and I admit to a moment’s envy.  Then a quick phonecall to Mum & Dad to impress them as I ran (which I think I did), I then hit the initially gentle slopes along the top down into Port Gaverne.  The last descent into Port Gaverne is quite steep and comes out down by the fancy restaurant there, bringing you out into the middle of the port before ascending up the road to Port Isaac.

I had picked up my pace by this point and was descending quite fast in a fashion that I think would impress most fell runners. It doesn’t however impress someone directing a scene for the next series of Doc Martin, and I ran rather fast straight into the background of a scene with Martin Clunes himself – I did wander why there was someone sitting with a walkytalky at the bottom of the hill.  I heard the word “Cut” amongst a couple of expletives, which I think were more directed at someone who was holding a walkytalky but not actually doing there job!  I waved, shouted sorry and carried on running (I was into my stride quite fast at this point). I did glimpse back, and realised I was being watched as I ran UP the hill to Port Isaac, and my silly pride meant I had to keep running all the way up to the top at a reasonable pace….suffice to say, when I reached the top of the hill I could barely breathe, let alone speak.  I decided not to descend into the centre of Port Isaac, but had a much needed pitstop at a lovely cafe called From the Sea (or something like that), where I had a delicious fresh crab sandwich, followed by a few pieces of fudge – it felt wrong to get out a hunk of glug in a cafe that sold cake!

The sky was turning distinctly grey, so I decided to head straight back whilst I was well fuelled and raring to go.  The first thing I had to encounter was a mini coach load of tourists (far be it from me to add the description of ageing pink haired brigade), who were all badgering Mr Martin Clunes for selfies and autographs. I simply couldn’t bring myself to join the throng, so exchanged a wave with a couple of crew members and remembered my task in hand, to climb the steep hill which I had so energetically run down, out of Port Gaverne.

The rain had clearly set in whilst I had been eating crab sandwiches, but luckily, seemed to do little more than spit for me – but it had left the going somewhat wet.  I might as well have run through every stream I passed – my feet certainly felt like I had.  The return journey (as all return journeys tend to) felt faster and quicker, although I’m sure there was more uphill.  I startled a few pheasants, and one in particular caused much mirth, as it clearly forgot that it had wings to fly away with and set of running down in the track in front of me in order to escape me – which seeing as I was going the same way meant that for a good 500metres I was hilariously chasing a pheasant who was clearly panicking about what to do and where to go.  He finally remembered what his wings were for and took off, but not without a lot of clucking and fuss. Trust me, you had to be there, but I was laughing out loud.  With sodden feet and a bit knackered – the only way back from Tregardoc to my hobbit hut is uphill, and through a drenched field, I eventually got back and had a greatly appreciated hot shower.  And then it started to rain.

I’m now eating a delicious hot Yellow Thai Curry, in the ever wonderful Cornish Arms in Pendoggett, drinking a Doom Bar beer and listening to some local banter….perfect!

I wonder – do you think they sell crab sandwiches in the Atacama Desert?!

The view from my hobbit hut…. 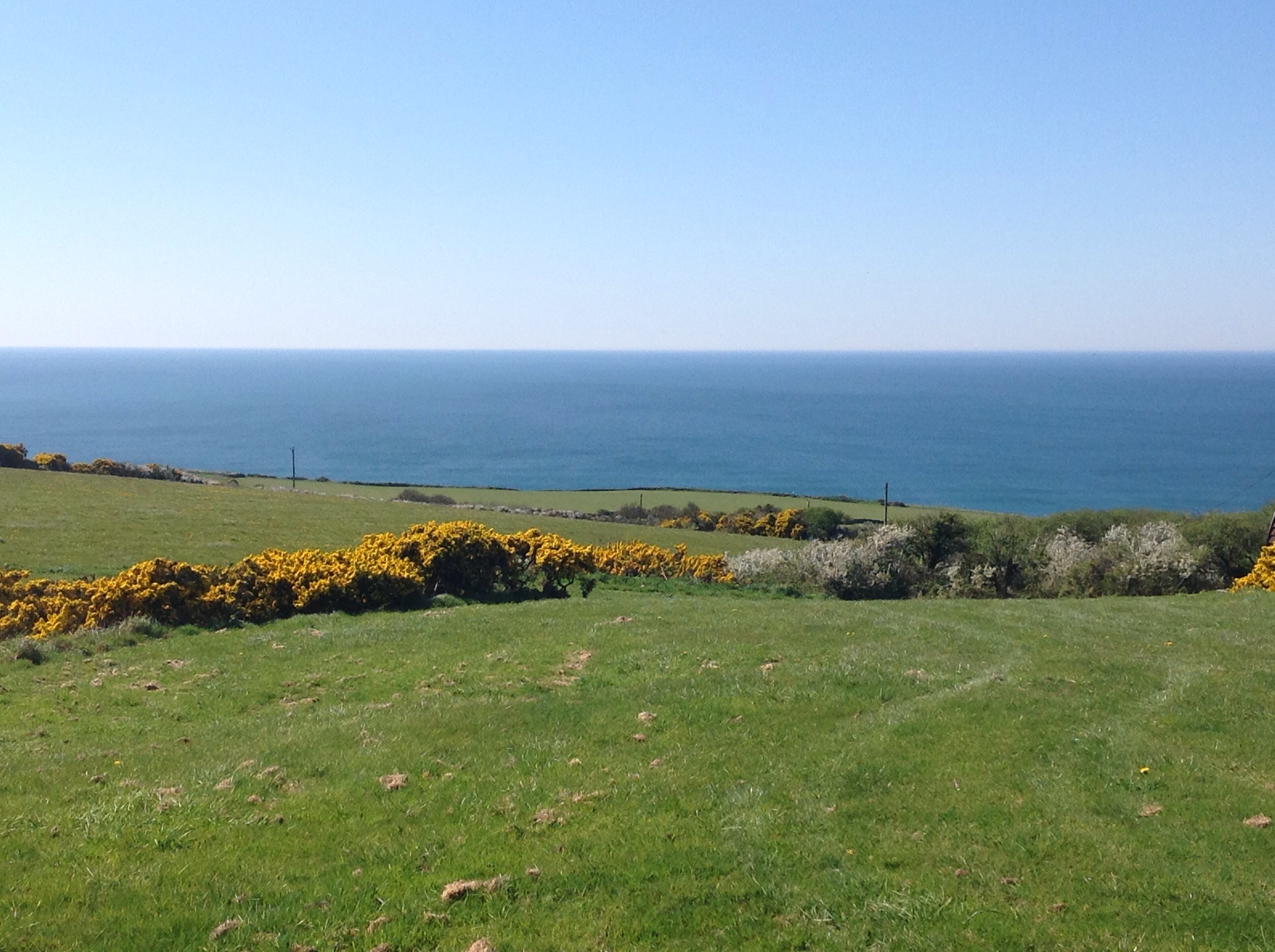 more pics will be posted soon!

One response to “Crab sandwiches and fudge!”